I heard and read some stories about Bali before even getting there, those stories lowered my expectations. And it is really touristy especially in cities near the airport. The beach is crowded and surfer wannabes ride the waves. I met a lot of Australians and there are plenty of restaurants, bars, t-shirt vendors, hotels, hostels and home stays.
On the narrow streets of Kuta every 100 meter you get offered a massage – of course not for free… Or people shout “Yes!” to look at the shop or change some money, or “Scooter?” followed with a gesture of the right hand that cranks up the gas handle. Everyone rides a scooter here and that’s the only way to get out of the mess for cheap.

So I rented a two wheeler for half a day and went south to Uluwatu an ancient place of worship. But first I needed to find a way out of the maze of narrow one way streets and heavy traffic in the heart of touristy town, damn! Some 20 minutes later I rode the two lane highway south, past the airport, where a plane just flew right above my head. The rest of the way was easy to find, up on the hills passing buses and vans on the narrow road. Once I arrived I understood, this place isn’t used for worshiping anymore, well to be fair the small temple compound inside still might be. Lord Ganesha acts as the bouncer at the door but a more effective mechanism are the locked gates 🙂
The beautiful compound is restless filled with hordes of tourists, busloads of them – I never saw that many westerners at a holy site in India…
The place is still spectacular as the temple sits right above the mighty cliffs overlooking the ocean and big waves roam in, crushing ashore – a magnificent view and sound. Wandering a couple hundred meters south, high above the ocean floor and out of the compound I escape the hordes and inhale the place properly.

Hinduism in Bali is different to India, when the religion swept to the island the new influences were simply overlaid on existing practices. Temples can be found in every tiny village – they look different to the Indian counterparts, what mostly catches the eye is the significant gate.
The gods might be the same but the way they are honored differs from India, incense sticks are burned and offerings brought every morning and placed on the ground to placate the bad spirits. The people believe that spirits are everywhere, the good in the mountains, giants and demons lurk beneath the sea and bad spirits haunt the woods or empty beaches. So the Balinese live either in the cities or up in the hills, leaving the beach to the tourists 🙂

It was a short intermezzo but just about right. I’m happy to leave, seeking for a tranquil place further east… 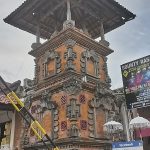 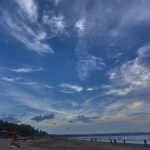 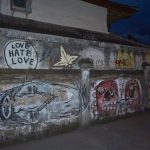 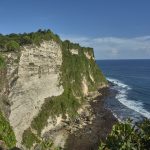 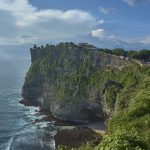 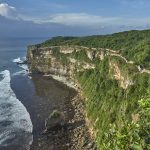 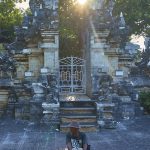 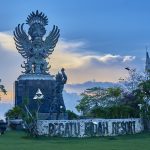 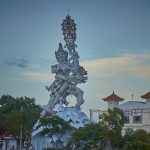 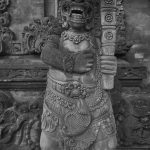 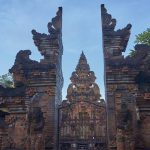