Legazpi – home of a perfect volcano

Mt. Mayon looking over Legazpi, wherever you are, you’ll spot the perfect cone shaped stratovolcano. Measuring 2.462 meters in height and being super active with the last eruption just 3 years ago Mayon is a buddy to count on. More info https://en.wikipedia.org/wiki/Mayon_Volcano

I went all around with a motorbike, the so called Mayon 360°, roughly 80 km. It can easily be done in half a day with stopping at some scenic spots in between, all offering great views of the mighty mountain that killed 5 trekkers on their way to conquer the summit during the last eruption. Since that tragedy climbs are prohibited. Looking at the perfectly shaped mountain from its base, offers better view anyhow…
I stopped at the Cagsawa Ruins, a former town that was destroyed by the volcano in 1814 killing more than 2000 people and Daraga church, the place where all remaining people moved after the deadly eruption.
Riding on the highway was a bit of a mission as cars, van, trucks, tricycles and people share one lane and the highway is busy as, going all the way north to Manila, the capital city. Dust, dirt and exhaust fumes were 50 % of my air consumption 😉 After I followed the signs for Tabaco City I rode in peace leaving the busy highway behind. The road went uphill in a wide open valley, always the symmetrical Mt. Mayon to the right and Mt. Masaraga to the left, an extinct stratovolcano. The clouds were moving in just in the left of the valley and the wind was pushing through, taking care of the chill. I could even smell the rain but didn’t feel it. Tabaco city itself is not a place to hang around for long; the name is still from the former Spanish era where the area was used to grow tobacco. Humidity levels and temperatures rose again when I went the last leg along the cost.
Finally I have to admit the almighty mountain really had the same shape all around, just the texture and color changed when riding it 360!

The city itself has a small beach boulevard with restaurants and again nice volcano views including the sleeping lion hill, named because of its shape, after a couple of beers one could maybe see the lion in the mountain I didn’t 🙂

Views from the tallest peak within the city limits Lignon hill are spectacular as well. But the most scenic spot I found was the Quitinday Green Hills, a bit out of town, small green hills most of the same shape and a lot of them next to each other. The place that offers the climb is very cautious about conservation. Steps just hewn in the soil, no wood or rock was used, bamboo rails, small bamboo huts with palm leaf roofs! And the way to get there, also a little adventure on its own, the concrete road is getting smaller and smaller until a rough dirt road takes you the last kilometers.

Ecologically green and fantastic, if all the touristy locations would be like that more people would get the idea! 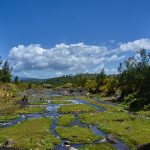 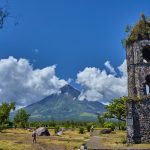 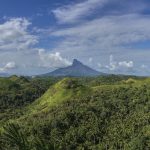 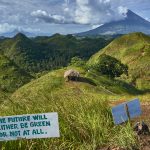 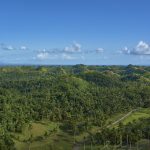 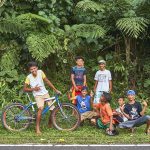 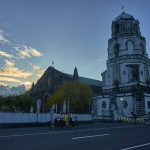 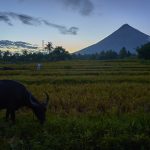 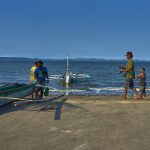 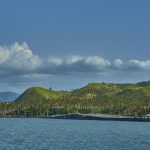 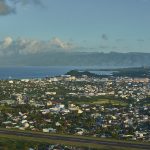 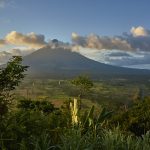 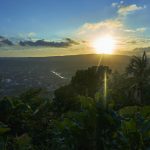 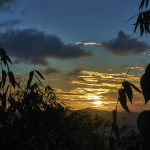 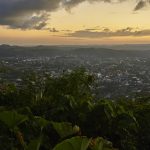