Driving through the city, you’ll see the metro being build, huge concrete pillars in the middle of the road, construction sites everywhere, the place is growing in a massive pace the last decade. it’s a big IT hub with microsoft and google having their indian head offices in a district called hitec city, oh yeah!
but the biggest industry here is pharmaceuticals. a huge office building that was about to be finished when i arrived in town was opened couple of days ago, you can almost feel the speed of construction and within that velocity the heart of the city beats, usual indian traffic, worse on rush hours. of course you want to minimize the time spend in traffic and maximize the chill.

Going south to the old city the district of charminar with it’s 4 pillar landmark bearing the same name and it’s maze like bazaar all around is buzzing. you can easily get lost in the small alleys with thousands of gem traders or go crazy with traffic. somehow a big anti-pole to the northern and western parts of the city which feels more modern with nice shops, big malls and some park areas.
Another touristic highlight i saw is golconda fort. It is erected on a hill so I finally got to see the massive size of the metropolis, hundreds of houses till the haze meets the horizon, some mosques, a couple of hills and some green spots in between. the fort itself is half part in ruins but still a nice place to spend a couple of hours.

With julian, a friend from berlin we went to check out the big buddha in hussain sagar lake, interesting story is that during the transport to a small island in the lake, the statue fell from the boat into the water. it took years to lift it up again and erect it at it’s foreseen base as the required boats and machines first needed to be build to recover the massive granite rock it was chiseled from. 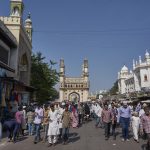 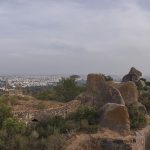 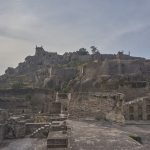 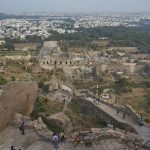 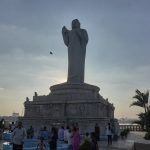 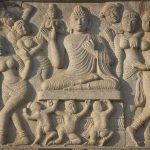 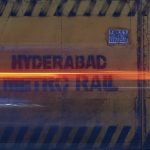 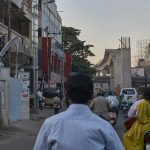 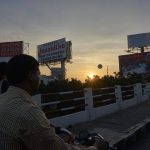