thinking about it now, it was the best decision to return the same route. although i’ve been to the places i was thinking i’ll see them from a different angle now!
Most of the guys i met – including myself – were so focused on crossing the pass, every village on the way was just another leg of the trail, i’ll go a bit further today, still have energy left, next day i push myself up there, speeding through the nice valley, trying to tackle the circuit in under 12 days, flying out of jomson or taking a jeep up cutting the days.
doing that you loose the focus of where you actually are, in the fucking Himalaya ! surrounded by old traditional stone brick villages and mighty mountains, of course the next ones are just a pass crossing away but properly giving respect to the annapurna range will need some time.
and when i just walked out of the city i saw that the last two days of snowfall transformed the whole valley into winter wonderland, to be seen from manang annapurna 3, it’s galcier just running down the middle, forming a lake on the foot – nice! 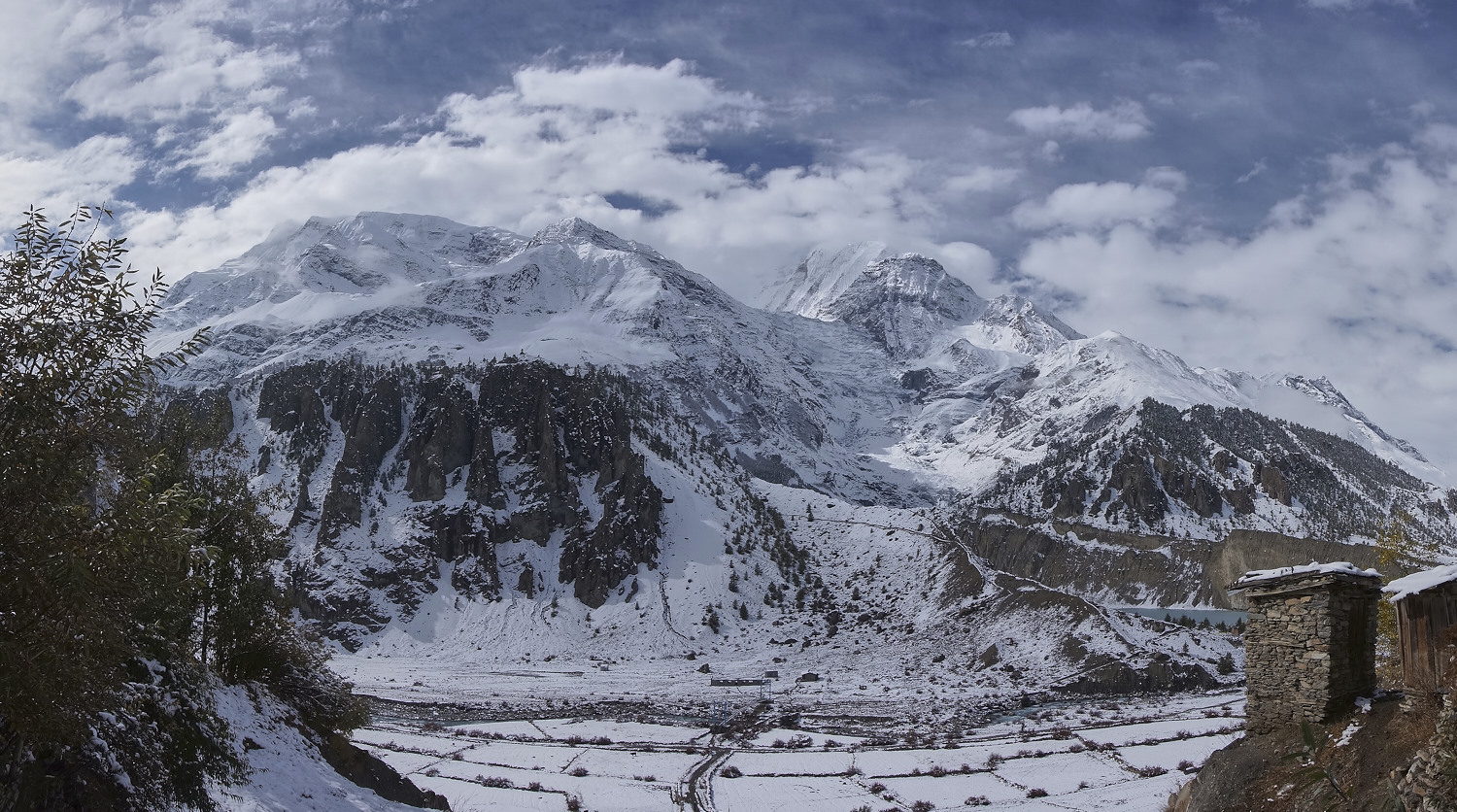 with the sun shining and perfect mood i went back guarded by the gigantic slopes of annapurna II with annapurna IV coming into sight, i can’t stop smiling and always need to stop to take a closer look.

in muchi i keep left to go the upper route through the village of ngawal.
one of the traditional villages overlooking the valley at 3700m and again it was snowing the afternoon, powder as far as you can see. 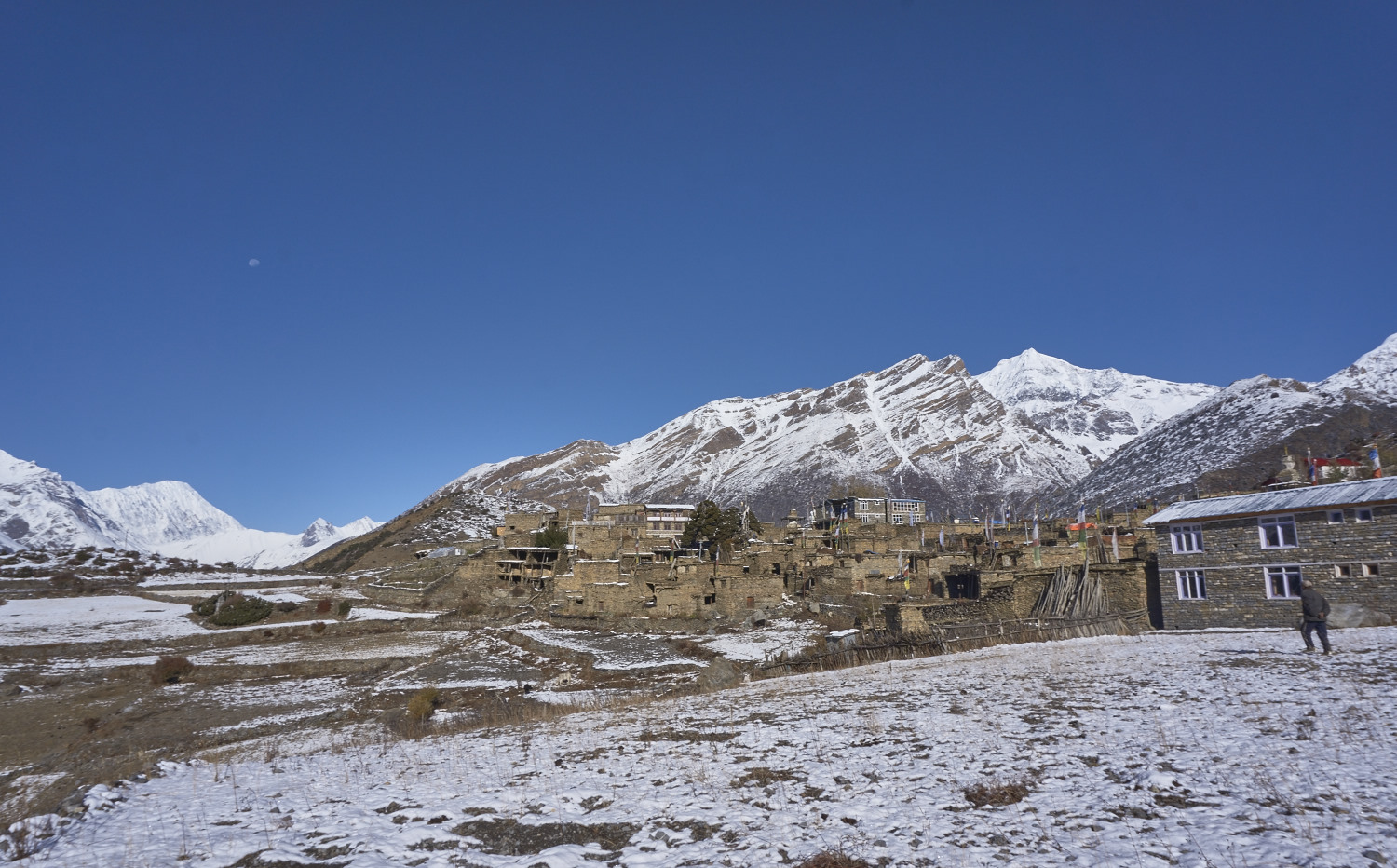 the trail follows the valley but still keeps it’s altitude high up, the next 2 h will be one of the highlights of the whole journey, overlooking most of the annapurna range, just walking opposite, keeping eye contact with the giants…see down in the valley the airstrip of humde and some white dots? those are bigger houses! 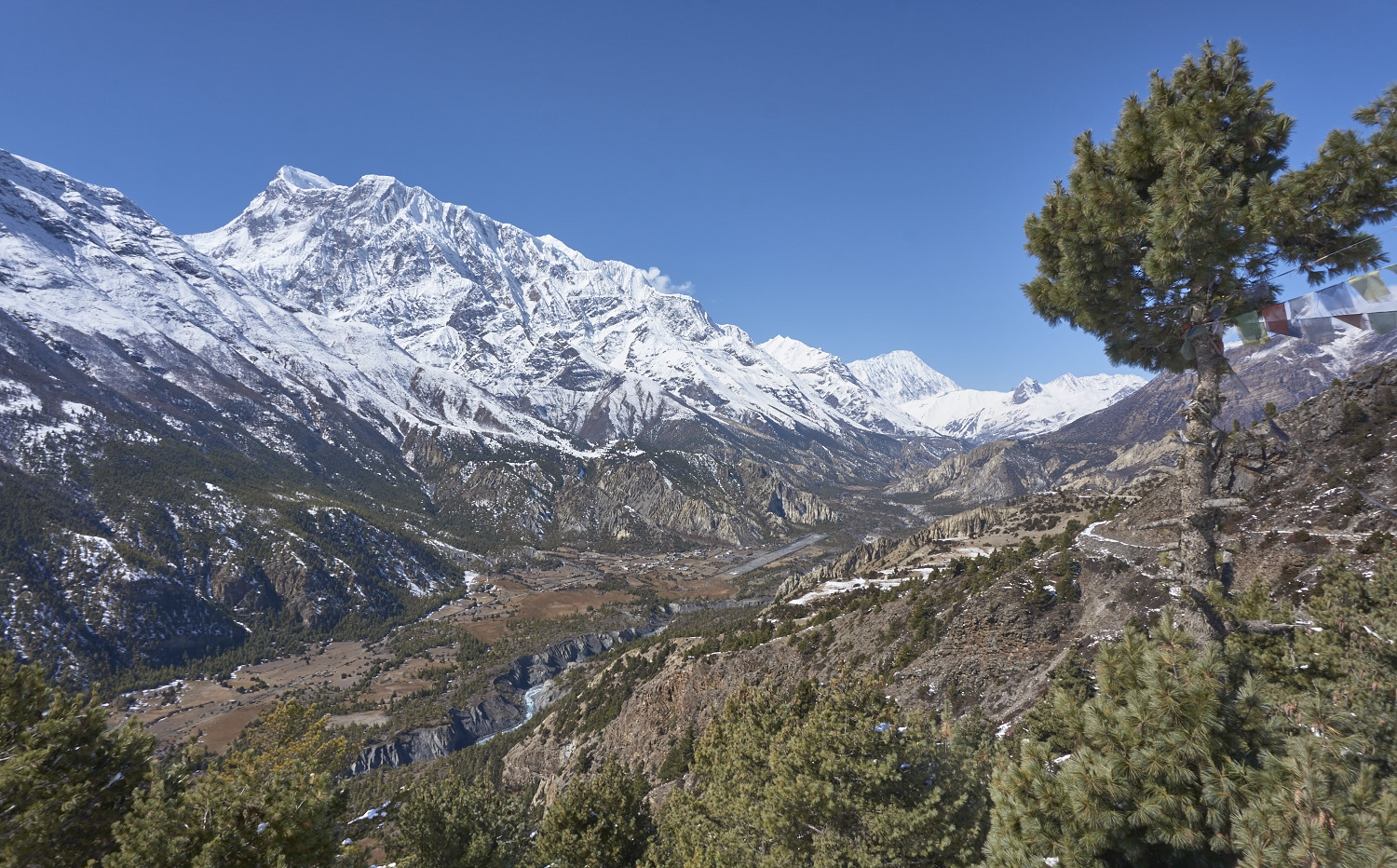 from the lookout at the old gompa you can watch birds of prey gently floating in air, gaining altitude by using the currents, not wasting a single stroke of their wings.

gyaru comes into sight facing the beautiful mountain of annapurna II, almost 8.000m in height – can you see the face in the mountain? right there the next day in the morning i saw an avalanche breaking away, rumbling sounds and white powder falling down the ridge in slow motion – that’s the volcano blast of the himalaya’s! 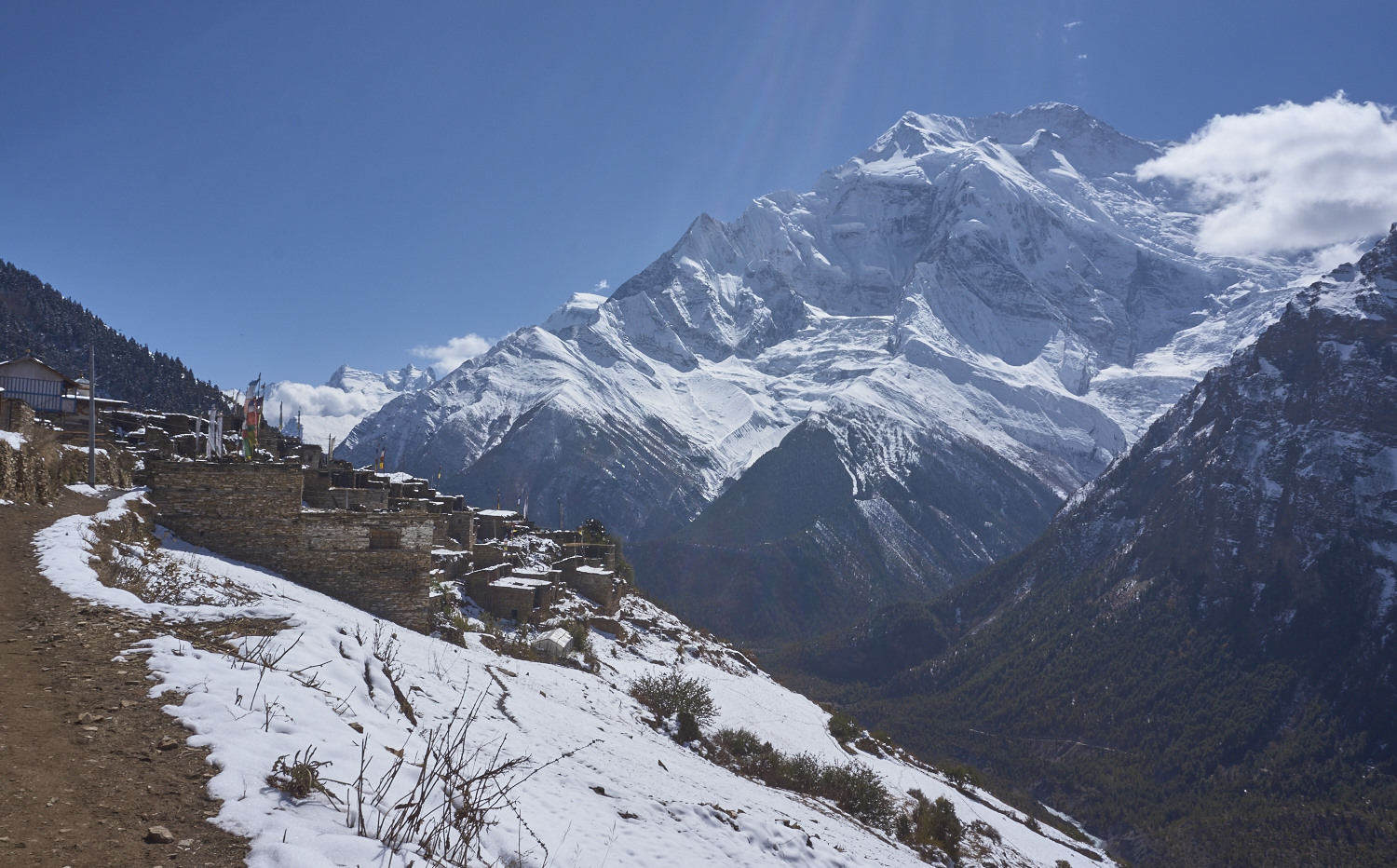 i was not alone enjoying the views today, some other hikers in good mood and willing to chat and some other friends made my day…
the goat was quite attracted to my camera, posing as if she’d done it before. 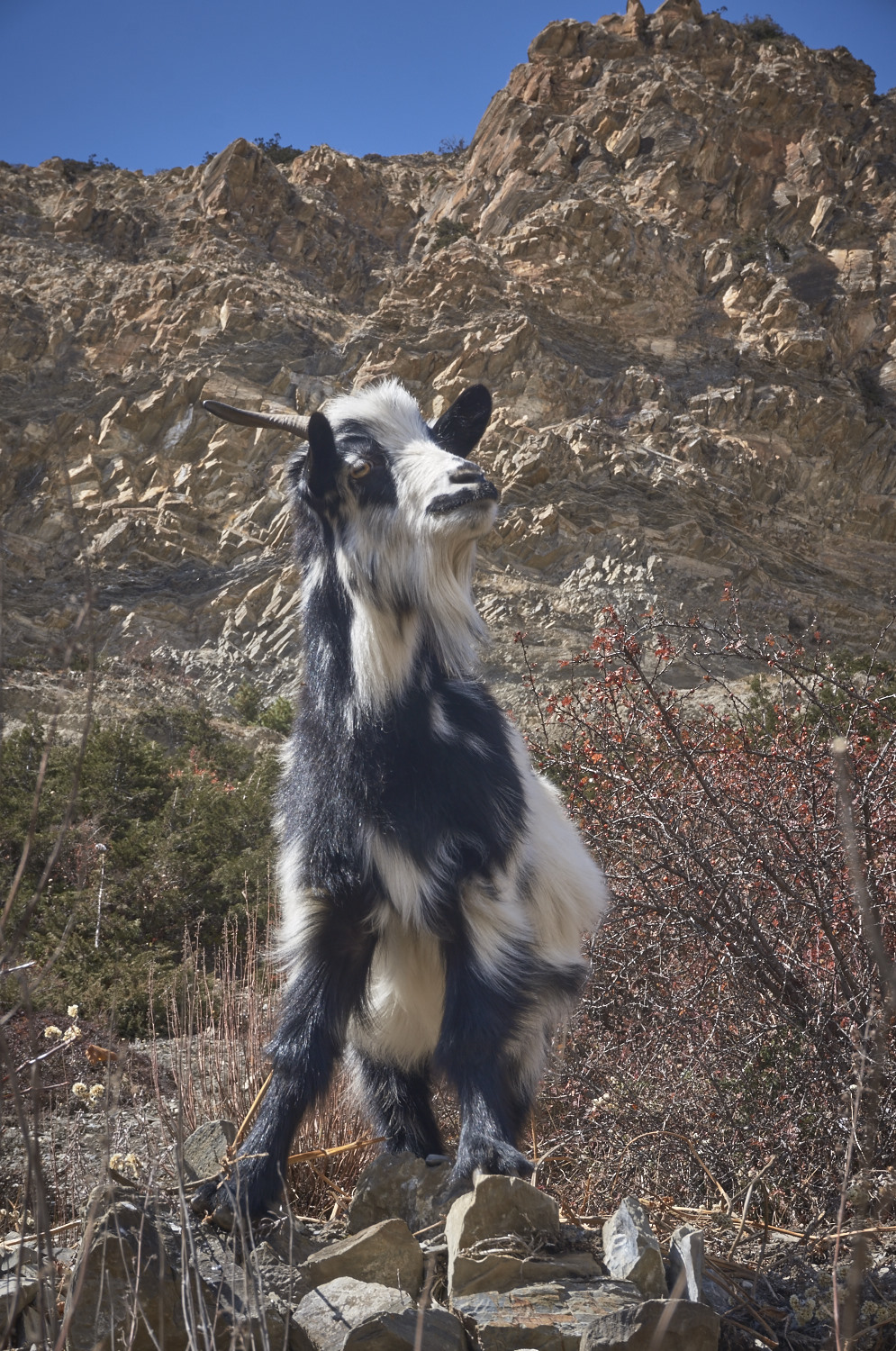 the yak though, a bit grumpy in nature, just looked up when i came close and further went to feast again on the last fresh grass 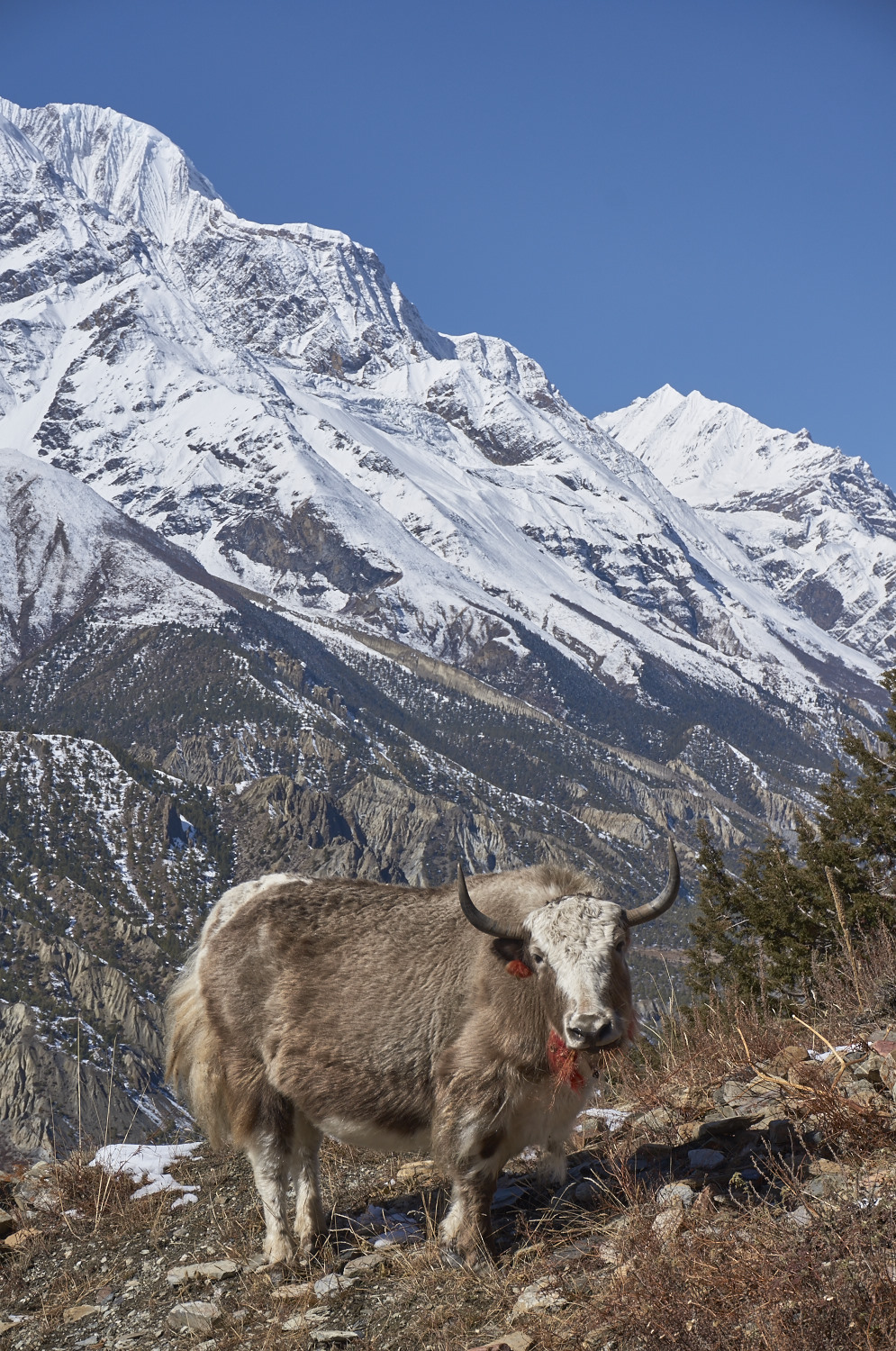 wandering through the ancient village of ghyaru with it’s beautiful stupa and gompas, old and awry stone wall houses, little alleys and mani walls, always overlooked by the magnificent annapurna II i go down the steep and serpentine trail, collect jock on the way – he’s feeling dizzy and wanting to go as far as manang today – it’s already afternoon so come with me, tomorrow is another perfect day! we have quite a social evening, meeting more trekkers in the annapurna hotel, cheers philipp & leila!

the next day i already feel my knees hurting a bit from the steep decent last afternoon, today i’ll go another 500 m down to chame, goodbye almighty annapurna range, it’s been a wild ride, up’s and down’s but i won’t forget.

going through the forest, 40 min before i reach the orchard village of bhratang one of my buddies standing pose for a last time 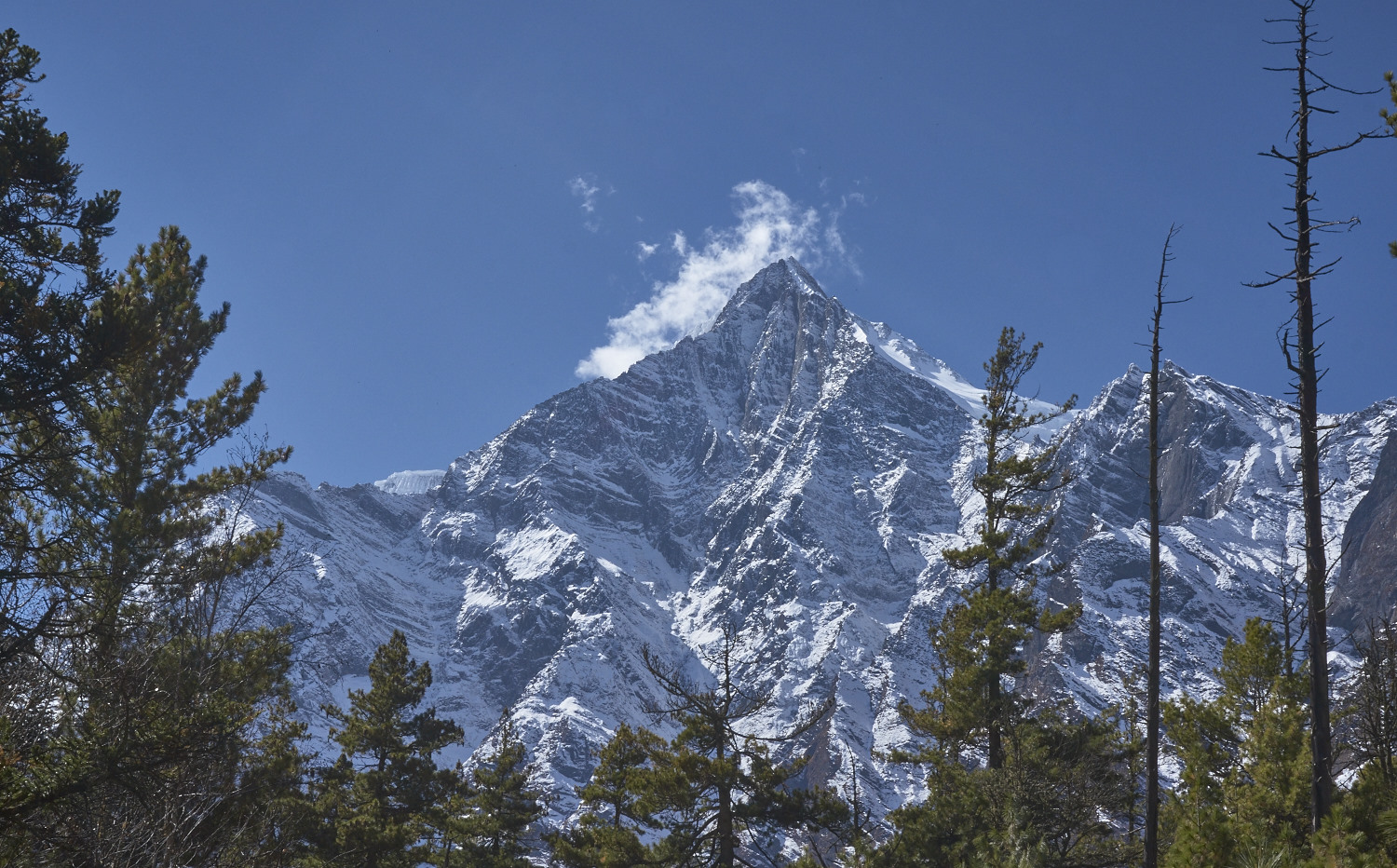 i walk until chame, staying overnight and taking a jeep back, my knee is killing me and i don’t want to make it worse.

It will be the roughest jeep ride ever, taking 6 hours for 55 km on the worst dirt road i’ve seen, flanked with big boulders, crossing multiple streams going down the valley, so much fun but you got to work hard as must the jeep and it’s driver.
Of course the car is fully loaded, 4 guys in the back and 4 in the front and changing people in the cargo area, we squeeze in tight, leaving no space for our bums and every big rock on the way will make your body hit the neighboring one or the door at rib height – i enjoy it though.
back in besi sahar we take a minibus to pokhara, being a more gentle ride – mostly on asphalt but also very squeezy as of the nepali nature of buses.

I learned a lot the last days and saw another example of our planet’s brute force and beauty, as with destruction also comes creation – om namah shivaya